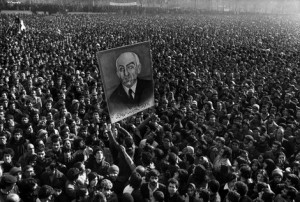 Americans and the British bear a good part of historical responsibility in Iranian radicalism and hostility towards the West and the 1953 Anglo-American coup is widely accepted as the culminating event in this history. The coup was furthermore used a “model” for similar operations in Latin America.

The primary cause was a disagreement over oil revenues: Iran received only 16% on net profits of the all-powerful Anglo-Iranian Oil Company (AIOC) controlled by the UK and had no control over these royalties as the company refused the audit of its accounts. Following the failure of negotiations for a 50-50 profit-sharing – whereas ARAMCO (Arabian American Oil Company) and Saudi Arabia had agreed as early as 1950 on just such a 50-50 scheme – the Iranian Parliament nationalized AIOC in 1951. Muhammad Mossadegh, the bearer of the nationalization project, was elected Prime Minister and quickly became a national hero. A crisis followed, lasting two years. Finally, the Republicans’ coming to power in the United States – they were more receptive than their Democratic predecessors to British insinuations that “Mossadegh would deliver Iran to the Soviets” – paved the way for the August 1953 coup, fomented by the CIA and MI6. Mossadegh was overthrown and Iran was delivered to the Pahlavi autocracy that would be replaced 26 years later by the mullahs’ government that we know.

This coup that still haunts the relationship between the United States and Iran has received wide scholarly attention over the past years. Recently, a book by the British journalist Christopher de Bellaigue, Patriot of Persia: Muhammad Mossadegh and a Tragic Anglo-American Coup[5], was particularly well received. De Bellaigue shows, based on new sources, that Mossadegh, a European-educated constitutionalist, was actually one of the first truly liberal leaders in the Middle East and that he was vehemently against communism. He wanted friendship with the West, but not slavish dependence. In the final analysis, however, deep British contempt for Iran and its people, coupled with American paranoia, were sufficient to blind the leaders of the time.

One can always speculate on what might have been had an agreement been reached with Mossadegh’s Iran. What is certain is what was inherited: a tragedy for the Iranian people and continued instability for the entire region.

At a time when Iran remains the regional power with the strongest influence in Syria and the tricky nuclear issue returns to the agenda, one hopes that today’s decision makers will have learned the lessons of the past and will at least be able avoid further tragedies.

2. For example on September 5th Iranian Foreign Minister Javad Zarif wished over Twitter a happy Rosh Hashanah (Jewish New Year) to the Jews and stated that the “the man who has denied the Holocaust [Ahmadinejad] is no longer there”.

3. Liberation of Iranian human rights activists; transfer of the negotiating role in the nuclear issue from the National Security Council to the Foreign Ministry

4. Khamenei has reportedly said that “Women give birth, breastfeed, they have a delicate physique, they are morally sensitive, …they cannot enter all areas”. He has also called Israel “a cancerous tumor” in 2012, adding that “it will be removed”