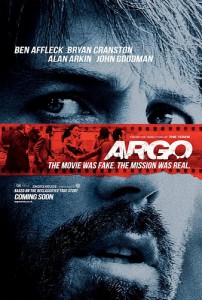 Coutant-Peyre is known to have defended the notorious terrorist Carlos the Jackal who is currently serving a life sentence in a French prison for killings in 1975, and she’s been his wife since 2001. She has also defended the French negationist[1] Roger Garaudy.

Coutant-Peyre attended in March 2013 the “The Hoax of Hollywood” conference organized in Teheran by the Ministry for Culture and Islamic Guidance in reaction to Argo’s winning the Oscar for best picture. A statement at the end of the conference depicted Argo as “a violation of international cultural norms” and stated that the award was an “attack against the Iranian nation and the entire humanity”[2].

Given Coutant-Peyre’s background it is unlikely that she could have seen the irony in the fact that accusations of “attack against the humanity” came from a government that has been known for its incessant denial of the Holocaust and the depiction of it as a “myth”.

Moreover, Ben Affleck, outside his career in film, is known for his progressive political positions and his work for various charitable and humanitarian causes, notably against poverty in Africa. George Clooney who was named UN Messenger of Peace in 2008[3] has been active in humanitarian causes to stop and prevent mass atrocities around the world. He was also against the war in Iraq in 2003. It is hard to see, therefore, how an approach targeting such personalities could contribute, say, to reduce the “iranophobia” of the West, so often decried by the same Iranians. This is most probably because the Iranian government’s real objective was rather ‘scoring a few points’ with the population in Iran and in the region.

Since its release, Argo has been criticized for not drawing a clear distinction between revolutionaries and ordinary Iranian citizens, while embellishing the story of the diplomats’ rescue. Still, the fact remains that the director chose to inform the audience by showing clips of the 1953 coup at the beginning of the movie. This is more than what has been done so far by any movie on the subject.

Anyway, presidential elections were held in the meantime, and won by Hassan Rouhani, a conservative supported by the reformers. This may be why we have not heard any more of a possible legal action against the producers of the movie.

Still, all this doesn’t change the fact that Americans and the British bear a good part of historical responsibility for Iranian hostility that has affected the region for over thirty years. The next article will cover this issue.

1. Holocaust denier who argues that the Holocaust either did not occur or was mostly a hoax

3. The highest distinction awarded by the UN Secretary General to a personality from the world of the arts, literature, music or sports